the Colourful history of hawaiian shirts

Three years after we opened our doors and had our first Summer party magazine launch, we thought it would be a good time to revisit the those halcyon days and  our Hawaiian shirt blog post. We can all do with a little colour in our lives.

The origins of the Hawaiian or Aloha shirt, much like their vivid designs, is steeped in myth and legend, with many colourful characters featured along the way.

Though the vibrant designs are synonymous with the carefree romance of island life, the beginning of the story has much humbler roots. Sugar predates Cpt. Cooks arrival to Hawaii in 1778, though it wasn't until the 1800's that the sugar-cane commodity became 'big-business'.

American-owned plantations began to appear on the islands around 1830, and from the success of the early farming, more business soon followed. The demand for sugar grew exponentially during the 'Gold Rush' of the 1840 and continued to grow through the 1860's, as the the value. With the United States embroiled in a civil war between 1861-1865,  the North's supply of sugar from the South was cut off, as well the South's agriculture being decimated; this bolstered Hawaiian sugar consumption and production.

The production and processing of sugarcane is a long and labour intensive process, which requires a lot of manpower that was not available on Hawaii. Planation owners began to seek for labourers internationally and importing a foreign workforce. 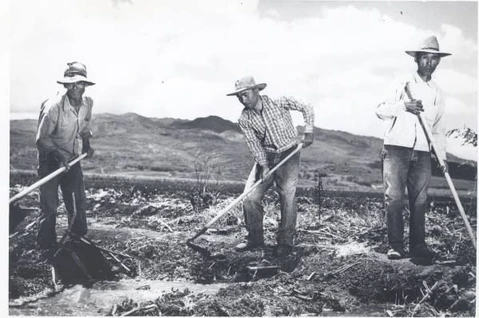 Hawaii began to experience an influx of migrant workers as contract labourers to farm the sugar fields in the thousands; these included Portuguese, Chinese, Korean, Filipino and Japanese immigrants, each bringing their own cultural identities and styles with them. The highest percentage of these were Chinese and Japanese immigrants, with 50,000 Chinese workers emigrating to Hawaii for work between 1850-1887 and 200,000 Japanese workers between 1884 -1924 changing the population and culture of Hawaii

The new immigrant plantation workers needed cheap, durable, lightweight clothing to work in the fields and the need for tough inexpensive clothing meant new fabrics were adopted for work in the sugar fields.

Often made of a lightweight denim or cotton, Palaka's became the cheap field jacket which was needed. Typically having checked blue design, the pattern drew from the uniforms of European seafarers who had been landing on Hawaii since Captain Cook's expedition first 'discovered' the island in 1778.  The word 'palaka',  translates as 'frock' which is derived from its nautical roots, though has become interchange for 'checkered' as well due to the distinctive pattern.

These early palaka designs, with their open splay collar, boxy cut and chest pocket are viewed as the earliest proto-Hawaiian shirt; though, unlike most Hawaiian shirts, it was long sleeved. 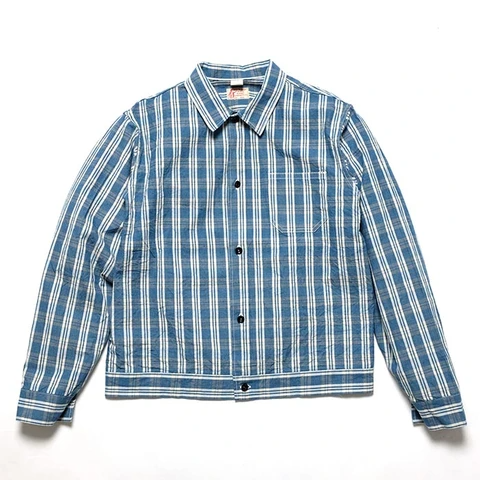 An early example of a palaka with distinctive check pattern and simple construction.

Hawaii had a rich history in producing clothing using ‘Tapa’, a type of bark-cloth which is made from natural plant fibres, and specifically the bark and inner-bark layers from certain trees such as the mulberry tree. The bark layers are repeatedly soaked and beaten softening the fibres to form a 'cloth' like fabric. Designs and geometric patterns were then applied to the barkcloth using paints and dyes made from indigenous plants and fibres.  Both men and women produced Tapa, though it was an arduous job which required a lot of labour to produce a little cloth. These were tribally worn as loin cloths for men, and as robes for women, continuously wound round the body 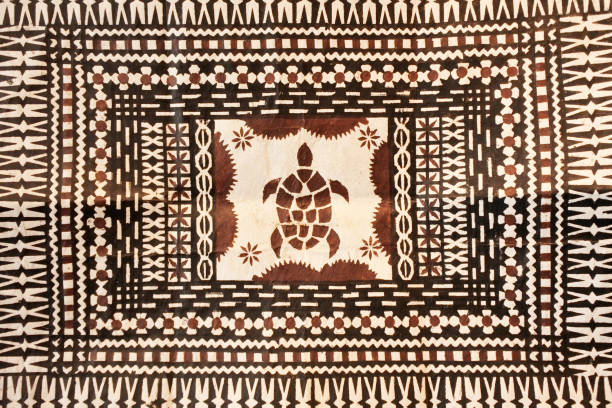 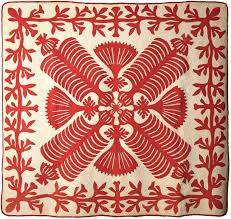 With the growth of the plantations and immigrant communities, Hawaii became a rich melting-pot,  each migrant population bought their own cultural style, fabrics, and ancestral ceremonial dress. The Filipinos brought the ‘barong tagalog’, a traditional un-tucked light weight shirt; Chinese vibrant printed silks and Japanese  bright colours and patterns of kimono fabrics, all of which inspired the first Hawaiian shirt as we recognise it today. 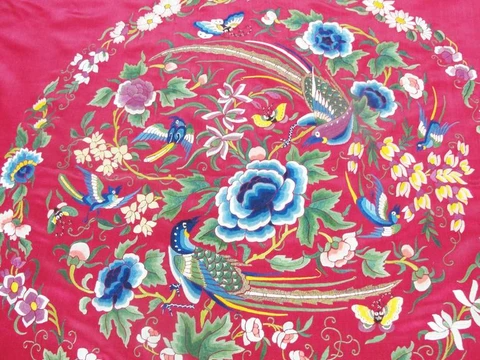 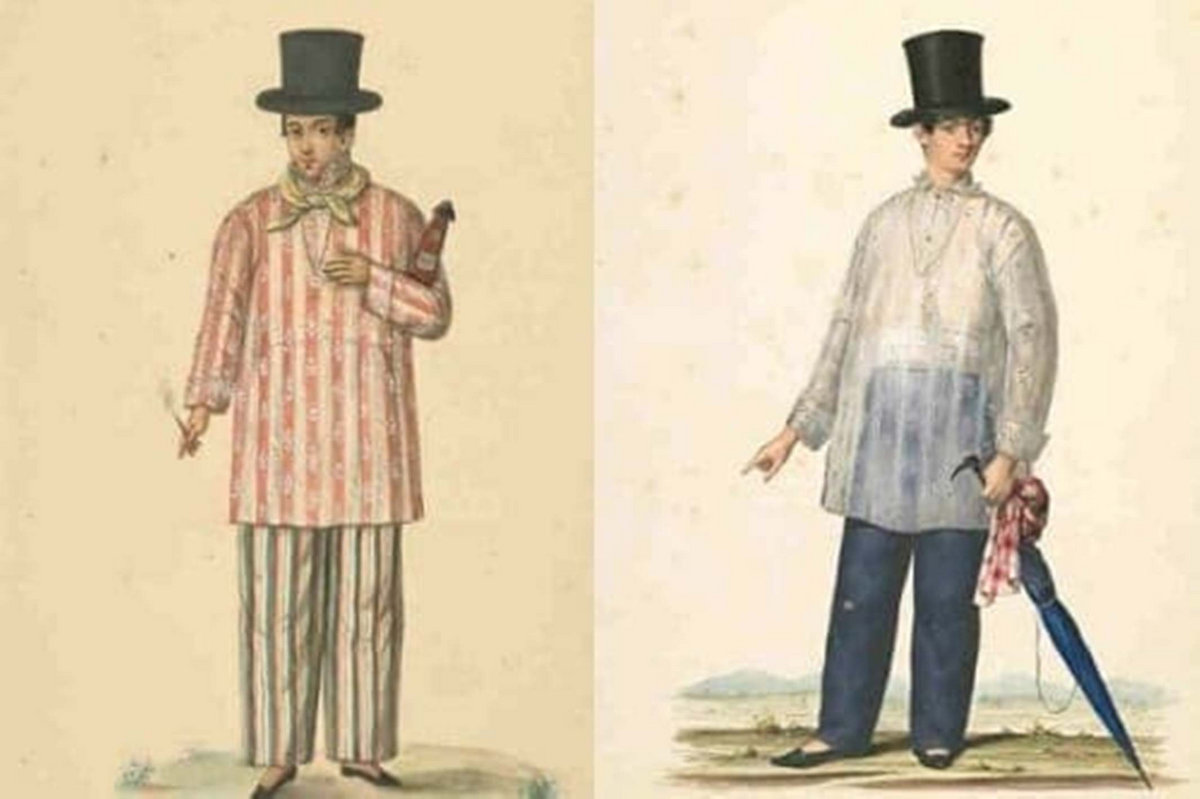 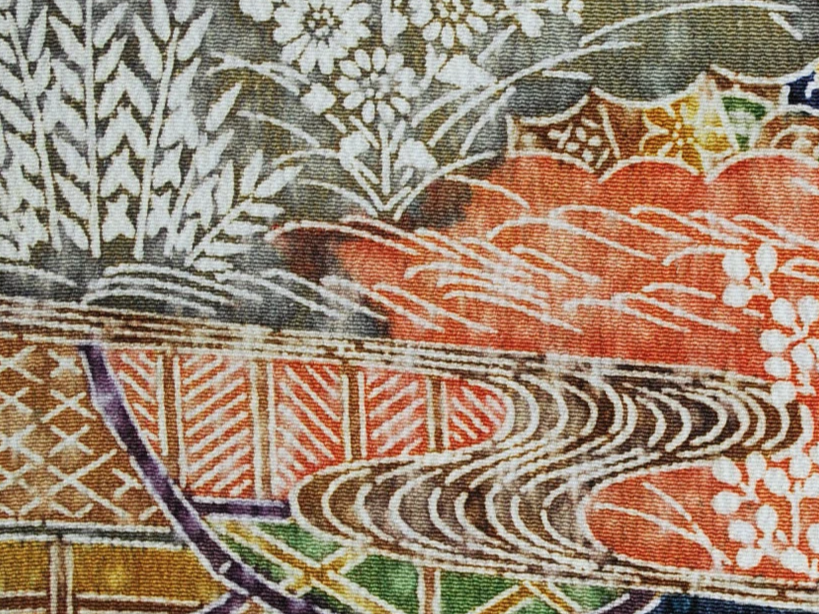 Though it is generally agreed that the first Hawaiian shirt appeared in the 1920’s, who first made it is still widely disputed; there are a few names, which through anecdote and folklore all play a role in its inception.

A student at the University of Hawaii, it has been said, was the first to create the ‘pre-Aloha’ shirt in the early to mind 1920’s. Gordon Young’s mother, a dress maker, tailored him a shirt using a lightweight Japanese yukata cloth which was conventionally used for Kimonos. These shirts used traditional geometric patterns and bamboo prints. The shirt supposedly became popular among Gordon’s peers at the University and they in turn had their own shirts made in a similar style using the now established Chinese & Japanese tailors Hawaii had to offer.

One of these Japanese tailors, Koichiro Miyamoto, known as ‘Musa-Shiya the shirt maker’ is supposed to have coined the name ‘Aloha Shirt’. The word aloha was already tied into the growing Hawaiian tourist industry for souvenirs, and in 1935 Musa-Shiya placed the first printed ad in the Honolulu Advertiser promoting his “Aloha-Shirts – Well tailored, beautiful designs and radiant colours”; these were available ready-made or made-to-order. Small adverts we placed in local newspapers aimed at tourists & some Hollywood stars of the time visiting Hawaii, such as John Barrymore and Shirley Temple placed orders with Musa-Shiya 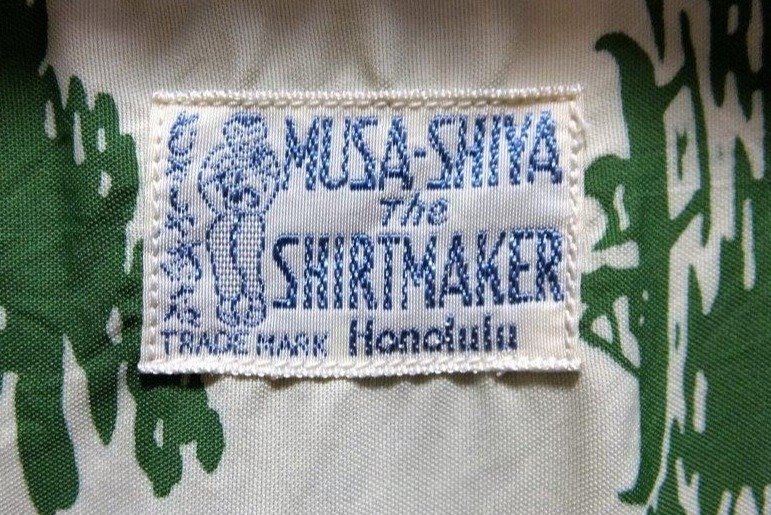 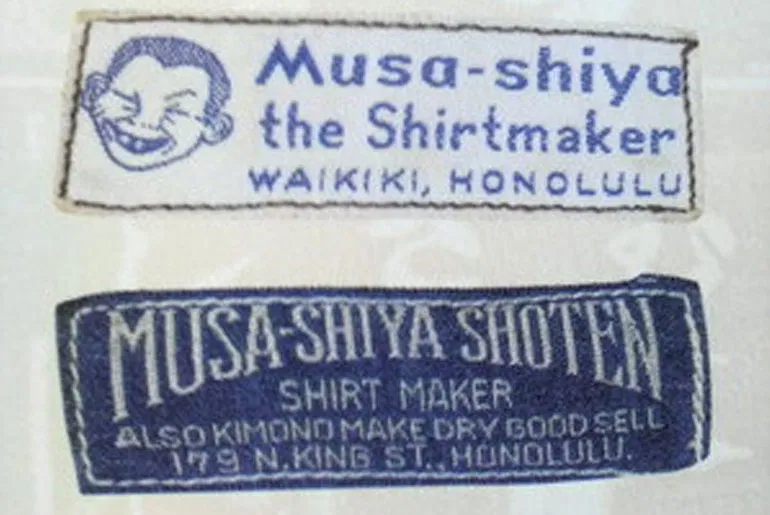 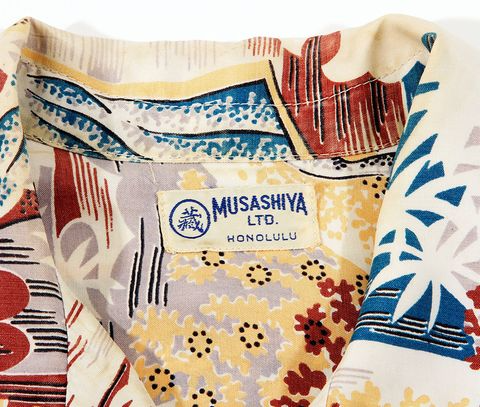 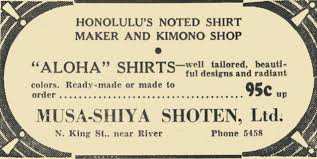 Though Mr Miyamoto was the first to coin the Aloha Shirt in print, its name was solidified with the design when Ellery Chung returned home from Yale in 1931. Majoring in economics, Chung arrived home from America at the height of the depression and was faced with King-Smith Clothiers - the faltering family business. Chung saw the marketing potential of the Aloha Shirt as a way to save the business.

With help from his sister Ethel, an early textile artist and designer who designed patterns based around island life and her own cruise experiences, he approached local tailors to make his sister’s designs in quantity, having them make a few dozen at a time to sell in his father’s store; putting the brightly coloured shirts in the window of the shop advertising the Hawaiian and Aloha shirt. Chung trademarked the name in 1936 and with that the name stuck.

His use of local tailors to ‘mass’ produce the shirts also saw a change in the way they were made and sold, and by 1937 the majority of designs had moved from custom tailor made to factory made, becoming an important part of Hawaii’s economy, focusing on the blossoming tourist market and textile industry which by the end of the 30’s exported $600,000 worth of clothing to mainland stores.

Around this time other companies started to see the possibilities of the shirts as a commercial enterprise, and invested in the style. Watamull’s East India Store commissioned 15 original prints to be created for use on silk for home furnishing and eventually shirts with Nat Norfleet and George Brangier establishing ‘Branfleet’ with an arrangement with Hawaiian native and five-time Olympic medallist Duke Kahanamoku to use his name on their designs. 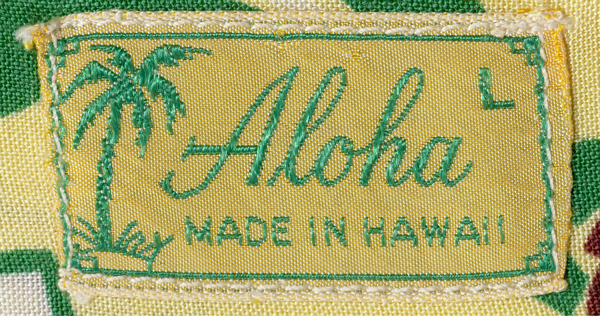 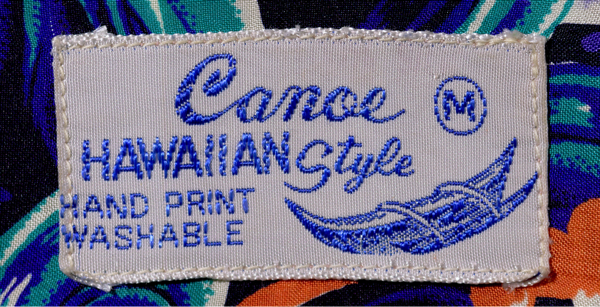 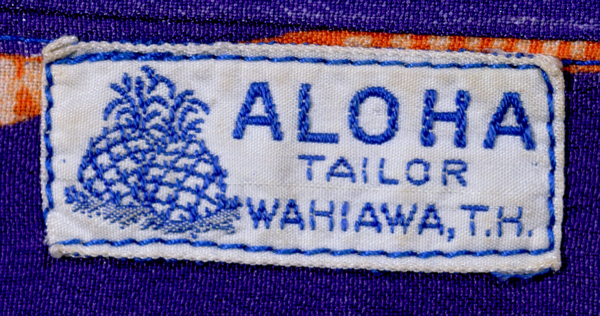 The Attack on Pearl Harbour in 1941 had a decisive effect on the future of the Hawaiian shirt. Though the American Naval base had been a huge presence in Hawaii since the 1900’s, the war years and influx of American service men passing through the base only helped to grow and solidify the Aloha shirt’s enduring popularity.

There was a big demand from visiting servicemen looking for a colourful memento of their time in paradise and as a change from their uniform-olive-drab fatigues; but as the import of fabrics ceased for the duration of the war, manufacturing had to draw from closer influences and resources. This saw an increase in the Hawaiian native pattern design and printing methods, along with the use of native fabrics, such as naturally produced rayon, drawing on Hawaii’s abundant plant and wildlife and lifestyle to create its own distinctive tropical prints. 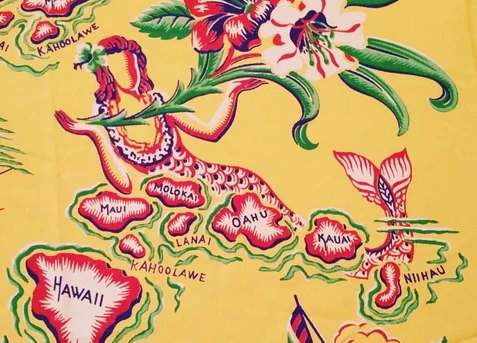 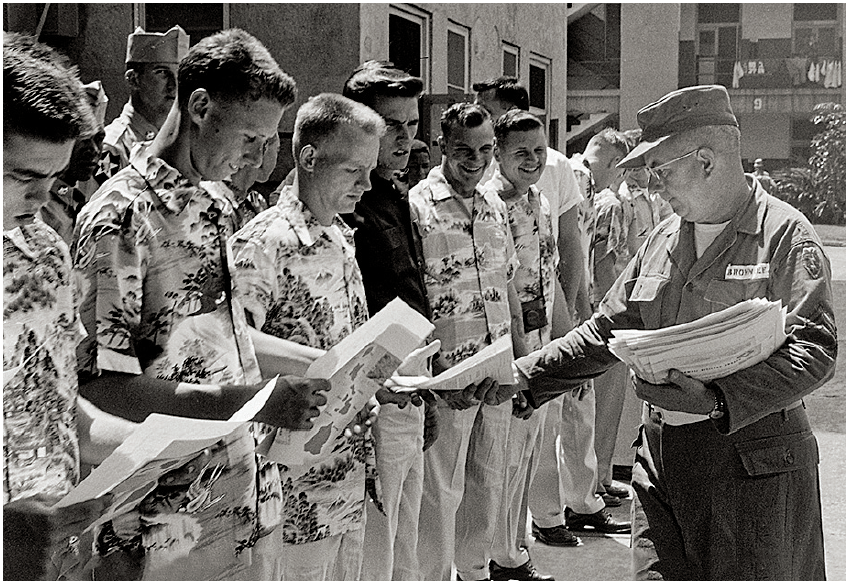 Post-war America saw a definite change in the way people dressed, with an obvious relaxation from the austere pre-war styles of the depression. Service men returning home from the war and America’s occupation of Japan sporting their ‘silkies’ (a nickname given to the soft lightweight shirts’ only helped to further the Aloha acceptance in a time when colour and levity was much needed after the largest conflict the world had ever seen. 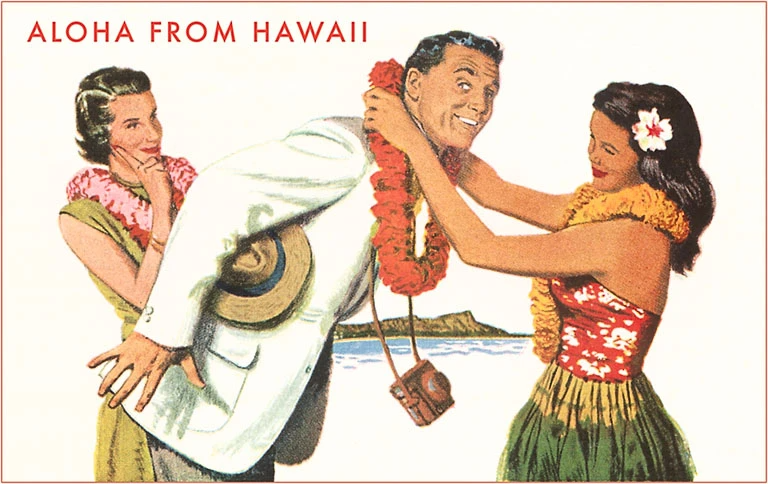 In 1946 the Hawaiian government invested $10,000 in the development of the Hawaiian shirt industry, and between the mid-1940 and the early 1950’s dozens of manufacturers opened for business. This time period also saw the tourist industry grow from 50,000 to 250,000 visitors annually.  One of the businesses to open in 1948 was ‘Shaheen’s of Honolulu’. 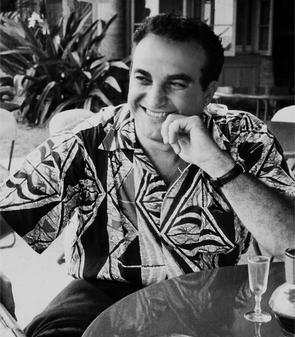 Alfred Shaheen, was an island native who fought in the European theatre with the Army Air Corps. On his return he wanted to modernise his family business and take advantage of the boom in popularity in Aloha shirts. Starting small with a team of four seamstresses and under the training supervision of his mother, the business grew until 1952 when he was at the forefront of the post-war industry creating and developing new printing methods. Hiring an in-house multi-ethnic design team of natives to combine the collective styles of Hawaiian, Chinese and Japanese styles, he became the most pre-eminent producer of Hawaiian shirts.

The true heyday for the Hawaiian shirt though has to be the 50’s. In 1951 President Harry Truman even featured on the front cover of Life Magazine sporting one, furthering its acceptance in the mainstream, and although its links with Hollywood date back to the 30’s, Aloha shirt’s screen appearances really started to make waves in such movies as 1953’s ‘From Here to Eternity’ when the cast including Montgomery Cliff and Frank Sinatra sported the shirts. Bing Crosby was an established fan of the style and Bob Hope sported on occasionally in their buddy movie ‘On the Road’ series, and Elvis Presley famously wore on for the cover of the 1961 film Blue Hawaii. 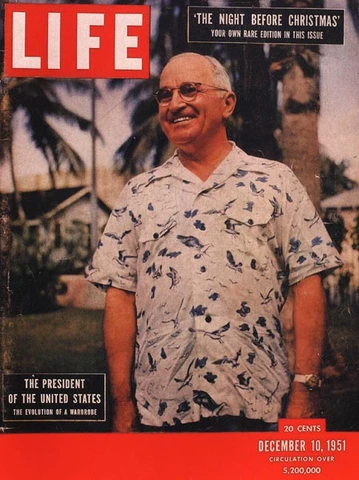 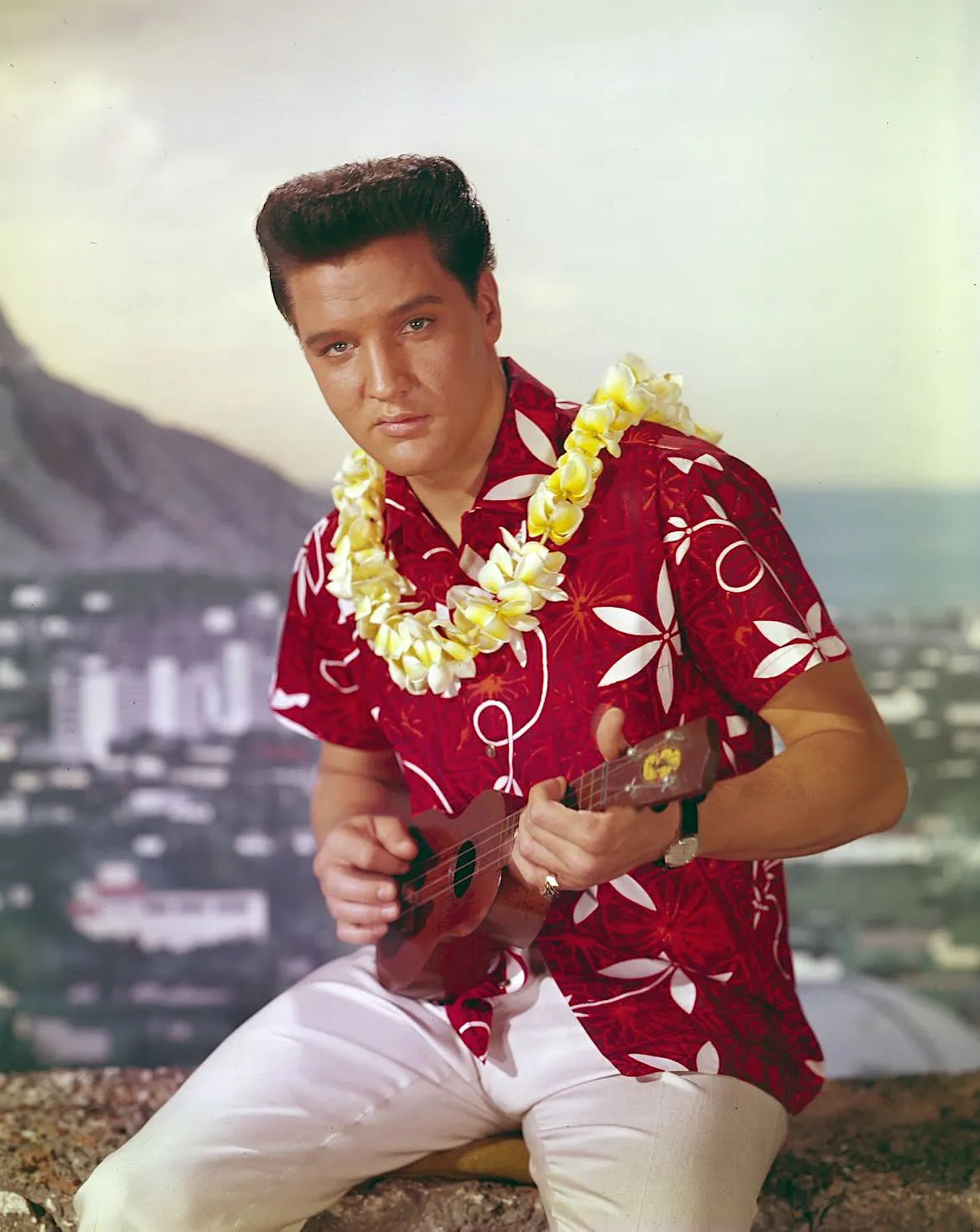 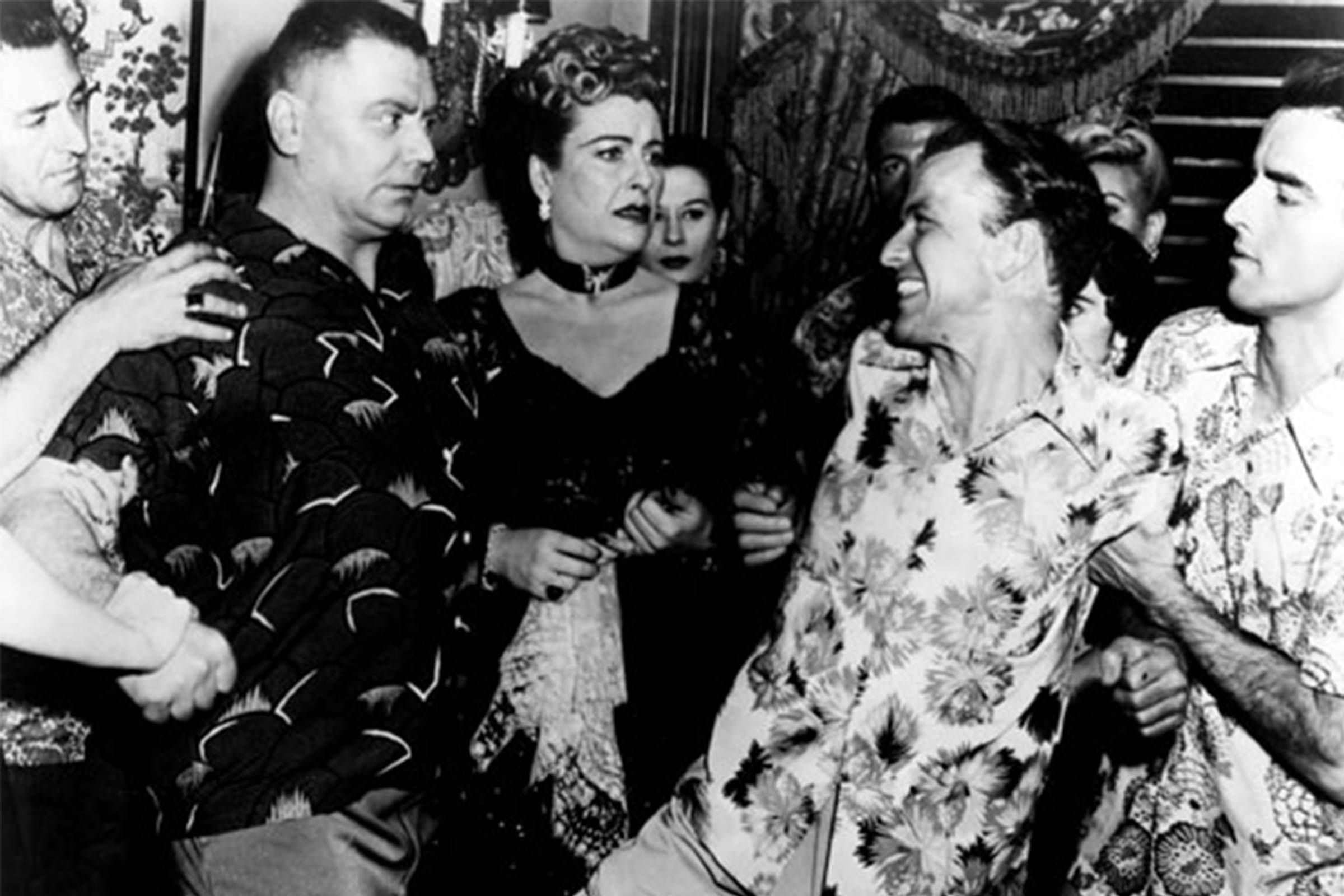 In 1959 Hawaii’s long-awaited bid for statehood was accepted making it the 50th state and granting Hawaii the same constitutional rights as the rest of the United States. The acceptance of Hawaiian style and culture was complete but for one thing: ‘Operation Liberation’ was launched in 1962 to promote the use of lighter more comfortable attire for office wear. The Hawaiian Fashion Guild gave each member of the senate two Aloha shirts, and in 1966 they launched ‘Aloha Fridays’ encouraging government employees to wear the native Hawaiian shirt. As Aloha Fridays grew and spread to the mainland Untied States, it became known as ‘Casual Fridays’. 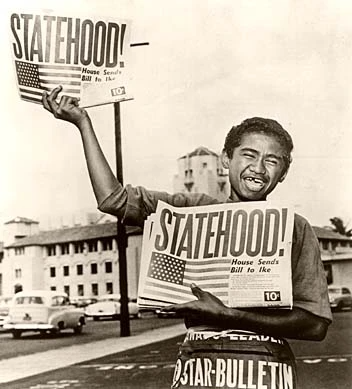 Since the 1960's Hawaiian shirts can be seen everywhere in some sense of another, allowing menswear to unabashed use colours and floral prints while still being masculine; think Tony Montana in Scarface, and Magnum PI. Though some may think the style to be garish, there is always a place for Hawaiian shirts in anyones wardrobe,  and as the influence of Hawaiian shirts began the 'casual Friday ' movement, and the necessity for the work place to be a suited-sombre affair has dwindled, what better time to add a splash of colour and a slice of whimsey to you style.

So this Friday, or any other day in true island spirit, un-tuck it, wear it loose, keep it casual, make it colourful and embrace Hawaiian shirt. And if you don't have one it’s time to say hello to the Aloha Shirt. 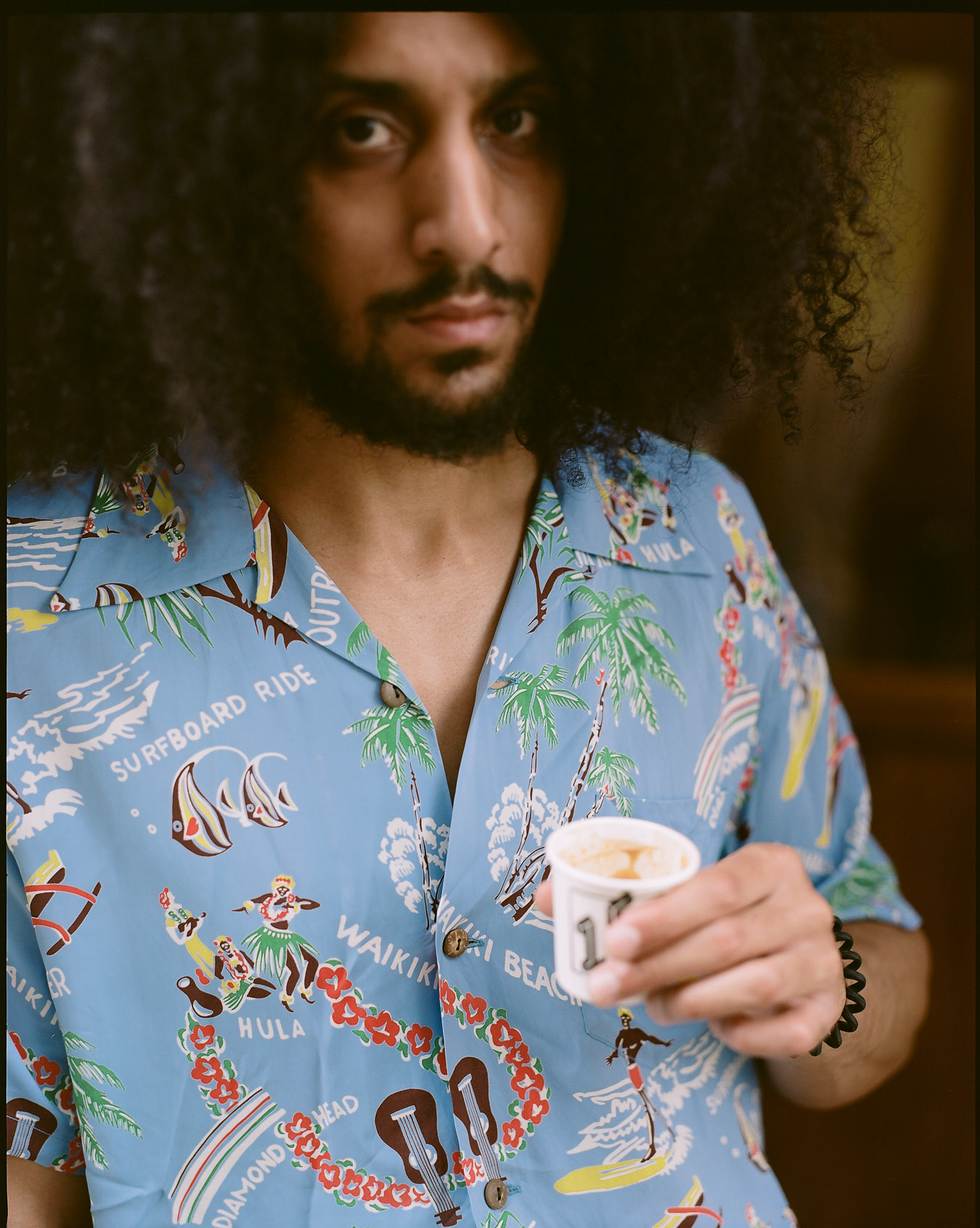 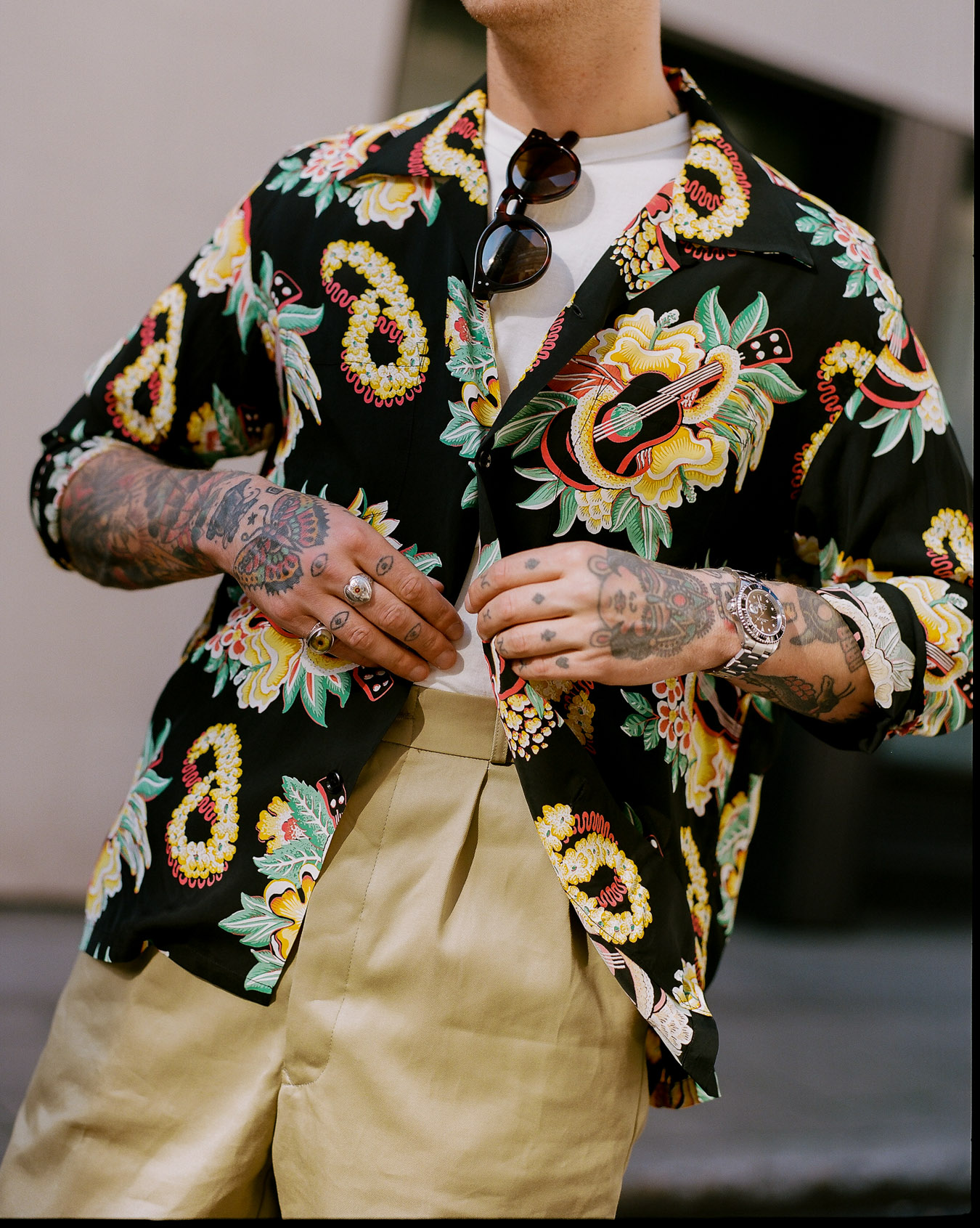 Three years since we our first year and summer party, we wanted to have a look back over the happy-snaps we got of the night and  great mix of faces we had turn out for the event.

Due to obvious reasons, for the past year we haven't been able to host our usual shin-digs and hangouts; though we hope to be able to welcome you back soon with a cold beer and a warm smile.